As an Amazon Associate we earn from qualifying purchases.

The stethoscope was invented in 1816 by a French physician, by the name of Rene Theophile Hyacinthe Laënnec.

The stethoscope is widely believed to have stemmed from Laennec’s experiences with a young woman he treated in 1816 for symptoms of tuberculosis.

Read on to find out why modesty became the mother of invention!

The Modest Man behind the Stethoscope

Before the 19th century, women did not have it easy when it came to medical exams. It was commonplace that many had their modesty violated, and often had little control over who was with them during an exam.

Before the invention of the stethoscope, the doctors of the time basically had to place their ears against the breast of a patient, whether male or female, to hear their heartbeat.

In the latter case, this could get very embarrassing for both patient and doctor alike. Fortunately, this mutual embarrassment ultimately led to of the best medical tools known to mankind- the stethoscope.

During his examination of a young woman with tuberculosis, Laennec used a piece of paper rolled up into a tube to auscultate the heart (to hear the patient’s heartbeat) without needing to touch his head to her breasts.

He immediately recognized the potential of this discovery.

Besides the improvement in modesty, Dr. Laennec realized that doctors could miss out on important sounds from all of the audible interference involved with pressing an ear into a patient’s chest.

Many doctors would miss the different, lighter sounds the heart and internal organs made, thus prompting them to misdiagnose a patient. His rolled-up newspaper trick helped to solve that problem, and at the same time vastly improved the ability to auscultate lungs, as well as auscultation of bowel sounds.

Rene eventually came up with a stethoscope design that resembled a wooden horn.

Unfortunately, the stethoscope was slow to catch on. The doctor only lived for about 45 years, 1781 to 1826, but his short life made an everlasting impact on the medical profession.

About 7 years before his death, Mr. Laennec published a 990-page work on his stethoscope and the art of using one. His version may have only been a wooden tube, but it got the industry thinking. Soon after his death, more inventors took the stethoscope to new levels.

While the device has had improvements made over the subsequent years, if it wasn’t for his initial work, doctors and diagnosticians of all sorts may have continued to find themselves in uncomfortable, embarrassing situations in the exam room.

The Progress in Design of the Stethoscope

The first model stethoscope was a long wooden tube, measuring roughly 12 1/2 inches long and was approx. 1 1/2 inches wide. There was a funnel at one end, for listening to the heart. The sounds of heart auscultation would travel up the tube to the doctor’s ear.

The design was simple, but for 1816 it was also very effective. Over the years many hands had a part in improving on this design. It was 12 years before the first improvement came.

Pierre Adolphe Piorry decided that a diaphragm was needed to hear those internal sounds more clearly. His diaphragm design was not made of metal, but of ivory, and it acted more like a pleximeter than anything else.

It was not until 1851 that an improvement over the Laennec stethoscope was made by Arthur Leared, who developed the binaural stethoscope.

This device is very similar to the standard two-ear design that almost everyone is familiar with. This design was improved upon further in 1853 by George Phillip Camman.

In 1851, Harvey Cushing invented the bi-lumen stethoscope. He took Laennec’s stethoscope and added two hollow tubes to it. This stethoscope was connected to two earpieces, which were inserted into each ear.

The final improvement that took place in the 19th century was done by Dr. Robert Bowles, who in 1894 added the bell to the diaphragm. This is the basic design that has been part of the stethoscope for roughly 130 years.

Even with vast improvements made already, the stethoscope was not yet perfected. In 1945, the Rappaport and Sprague design placed the two tubes side by side, creating the bi-lumen stethoscope.

One of the tubes was for listening to the heartbeat while the other was designed to hear the lungs. With two individual sound channels, doctors could more precisely auscultate points of interest.

This design lasted a mere 16 more years as in 1961 Dr. David Littmann refined the Rappaport and Sprague design. He lightened the stethoscope with new materials, while at the same time, adding a spring to make it easier to use.

However, that was not the only improvement he made. Dr. Littmann also worked on the diaphragm, creating a system where the doctors using the device could listen to low pitch sounds, or filter them out with a little difference in pressure applied to the bell.

A light amount of pressure helped the doctor hear the low pitch sounds, and a little heavier pressure let them hear the higher-pitched sounds.

In the intervening years, companies, not individuals, have made minor adjustments to this medical device.

In 2008 stethoscopes were combined with the recent availability of mobile phones to create the digital stethoscope, some of which would double as an ECG and can record electrocardiograms without requiring the patient or doctor to wear electrodes.

Electronic stethoscopes can be found in many clinics and even homes, providing new and exciting ways to auscultate the heart or lungs. The ability to digitally record audio and data and interface directly with a smartphone provides great utility for collaboration.

There is no doubt that the stethoscope has opened up the auscultation world, and will continue to do so into the future.

If you are interested in joining the electronic stethoscope revolution, check out the latest the market has to offer in our guide here: The Best Electronic Stethoscopes

The Impact of the Stethoscope

Despite the original skepticism by earlier century doctors, the stethoscope has made a great impact. In fact, millions of doctors, nurses, and emergency medical technicians all use the same type of instrument in their health care work.

These medical professionals have been able to make a better diagnosis, as they can clearly hear the sounds of different diseases or ailments that are harming the internal part of the body. Many health conditions and diseases would go undetected if it was not for the invention of this medical device.

Literally, millions of lives have been saved, because one man decided he could not handle the embarrassment and discomfort of auscultation any longer. This invention also allowed thousands of doctors and nurses to help their patients without touching them.

The reason it has achieved this high status is that 3M has been at the forefront of stethoscope design for over 50 years.

Its reputation is beyond reproach, they have consistently delivered superior acoustics, frequently upgrading and optimizing their designs, providing top-notch performance.

If you’re interested in owning a piece of stethoscope prestige, check out our Littmann stethoscopes guide here: Littmann Stethoscopes Review

A rolled-up piece of paper, made to avoid embarrassment at the moment, has led to the invention and development of a great medical device that is used by millions of health care professionals every day.

People have a better chance of surviving their ailments because one doctor found the courage and inspiration to change the way people were treated.

The stethoscope is like an amplifier for the ear, providing doctors with super-human hearing, allowing them to auscultate the different sounds that take place inside your body.

It is a fundamentally simple medical tool. Yet, its impact simply cannot be measured.

Are you interested in getting your own stethoscope, whether for profession, practice, or FUN? Check out our comprehensive stethoscopes guide here: The Definitive Stethoscopes Guide

Amazon and the Amazon logo are trademarks of Amazon.com, Inc, or its affiliates. 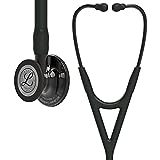 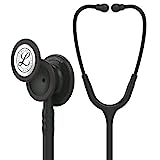 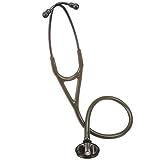 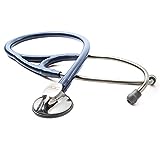 Stethoscopes.ninja is a participant in the Amazon Services LLC Associates Program, an affiliate advertising program designed to provide a means for sites to earn advertising fees by advertising and linking to Amazon.com and/or country specific Amazon websites.